Glen Fischer had no idea he was about to make history when he and his son Gary set out to fish the Muskegon River last December.  Gary hooked into a solid fish on the inside seam of a soft eddy that fought unusually hard but eventually made it to the net.  What they discovered next was astonishing.  “That rainbow trout had man parts on its underside” said Glen looking a bit squeamish.  “I thought my eyes was playing tricks on me but I showed Gary and he screeched GET THAT THING AWAY FROM ME!”.  “We took some pictures and threw it back because it was freakin’ us out”.

Are increased regulations for medication disposal the answer?

DNR spokesperson Alan Spanks reviewed the photos and confirmed that the fish indeed had set of “wedding tackle” and that the phenomena is believed to result from massive quantities of pharmaceuticals making their way into the watershed.  “People around here are using so much Viagra these days that now we’re seeing man parts on fish”.   “It’s not just caddis anymore” Spanks went on to say.  Viagra is rumored to be one of several pharmaceuticals used in large quantities in this region.  Others include a variety of anti-psychotics, estrogen supplements, and hair growth stimulants.  If we don’t take action then folks around here are going to have some truly strange outings on these waters. 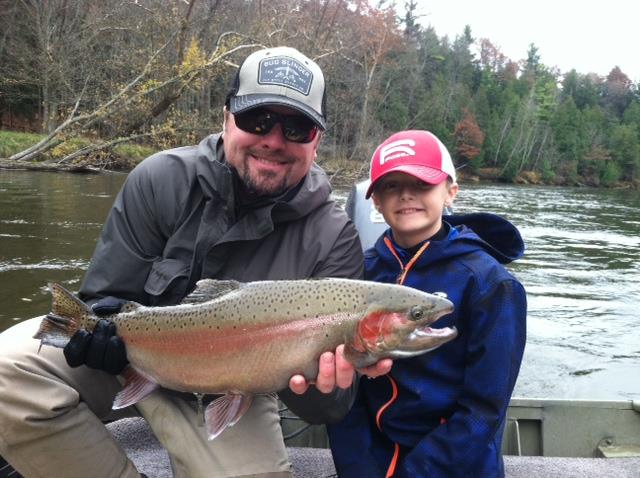 Could this giant Rainbow trout be a result of mutations caused by performance enhancing drugs?

This entry was posted on February 4, 2014 by Chief Rocka. It was filed under Tuesday Bananas and was tagged with bananas, Muskegon River.