Frustration with out-of-state anglers came to a head this week when the Bull Shoals dam was sabotaged and sprayed with graffiti sending a clear signal to MI anglers to “go back to where you’re from!” as commented by local resident Hank Himler while watching a caravan of trucks pulling drift boats through his little town.  The White River swells with Michigan residents, known to locals as ‘Mitt Monkeys’, during the winter months when northern waters are on lock-down.  These anglers, unable to go a couple months not chasing trout and unwilling to use that time to re-acquaint themselves with their families, are often found tooling around the White River watershed.  When asked why MI fisherman are wearing thin on the locals, resident Hank Himler talked about long lines at the all-you-can-eat BBQ buffets, nonstop craft beer snobbery, Ted Nugent and Kid Rock constantly playing on the juke box at his favorite bar, their ‘stupid’ flat brimmed baseball hats, and a litany of other insulting behaviors. 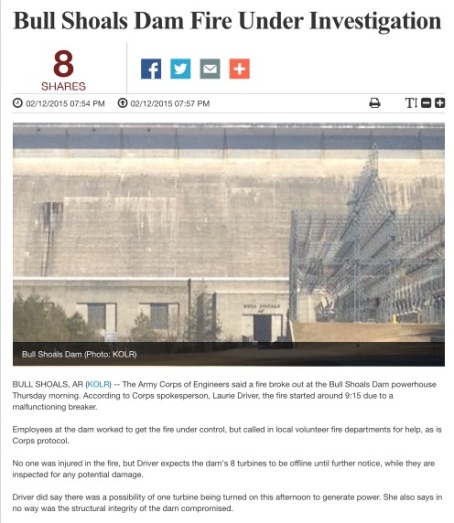 One would think that the increase in tourism would be attractive to the local towns and communities surrounding Bull Shoals but it appears that ‘Mitt Monkeys’ have worn out their welcome.  “They keep trying to return their beer bottles for money, they eat all of our beef jerky, and they tie up the store’s bathroom for hours each morning” noted Ed Gantry, owner of the local E-Z Mart.  There is a strong suspicion that this week’s dam shutdown was related to locals frustrated with Michigan bugslingers as evidenced by the message spray painted on the wall of their enormous dam.

It remains to be seen if ‘Mitt Monkeys’ will heed the obvious frustrations of local residents and promptly return to the north or if they will continue to clog the fabled Arkansas river systems and all you can eat BBQ rib restaurants.

This entry was posted on February 17, 2015 by Lt. Dan. It was filed under Uncategorized .