This week marks the midway point of the annual migration of Mitt Monkeys to the northern Arkansas White River watershed and, as expected, tensions with local residents are at an all-time high.  From the bloated Cotter Courier police blotter to boat ramp protests at the Bull Shoals dam, it’s clear that Michigan anglers have once again worn out their welcome.

With local officials at their wits’ end, area officials reached out to inquire whether the new administration’s controversial travel ban could be invoked.  After hearing testimony from local restaurant and hotel proprietors and reviewing selected 911 recordings, the administration quickly became sympathetic to the plight of Arkansas residents and committed to adding Michigan anglers to the travel ban under an executive order.  “We think this is best for everyone” tweeted POTUS, “these Mitt Monkeys are really bad and totally stupid”.

The area has a long history of Michigan angler distaste.  Tensions boiled over in 2015 when Mitt Monkeys were suspected of starting a fire at the Bull Shoals dam (link to article).  In 2016, the Arkansas Game and Fish Commission issued an invasive species alert for Michigan Anglers, a tongue-in-cheek campaign with limited success (link to article).

A rapidly growing group of area politicians are advocating additional tactics to supplement the ban including the construction of a wall said to be paid for by Michigan anglers at the Arkansas border.  Others have put forth a plan to post “Welcome to Buckeye Country” signs at the border meant to confuse, disorient, and deter Michigan anglers. 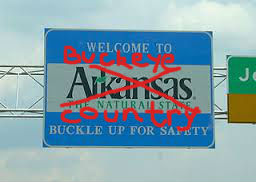 With the expectation of an executive order, residents may finally get permanent relief from their distant neighbors to the north.  Will the impending travel ban keep Michigan anglers from venturing south or is a massive wall in order?  Michigan anglers may finally realize that they aren’t welcome back in Cotter.

* Tuesday Bananas is a once a week satire column intended for entertainment purposes only.  No fish were harmed in the creation of this post.

This entry was posted on February 14, 2017 by Lt. Dan. It was filed under Uncategorized .